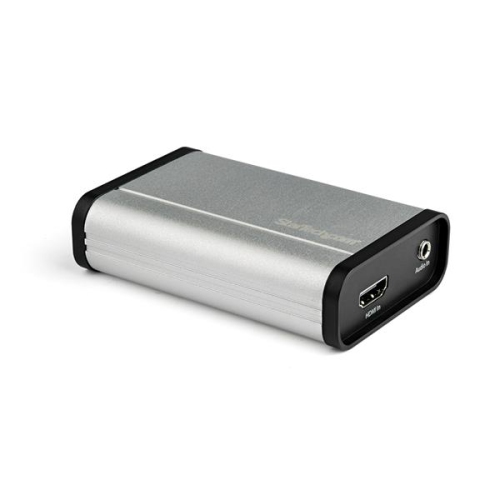 Capture meetings, presentations or conference calls directly to your computerUpload recorded videos or live broadcast your signal to any online video platformRecord training and tutorial videos from your laptop or game console
SAVE $35$322.99
$32299
SALE ends: June 17, 2021
Compare all 3 offers from $322.99
Sold and shipped by Best Buy Business
3.9 seller rating, 1055 review(s)

Capture meetings, presentations or conference calls directly to your computerUpload recorded videos or live broadcast your signal to any online video platformRecord training and tutorial videos from your laptop or game console

This HDMI to USB-C video capture device lets you record HDMI video to your USB-C™, USB-A or Thunderbolt™ 3 computer, and features a durable aluminum enclosure so it can safely travel with your laptop.

Easy to set up, easy to capture

For hassle-free recording, you can install the HDMI capture device by simply connecting it to your computer. The capture device features USB Video Class (UVC), a video capture standard that’s natively supported by Mac, Windows® and Linux®. Unlike other capture devices that require proprietary driver installation, UVC based capture devices install automatically for a truly plug-and-play solution. Also, with this capture device you're not limited to the included software. You can use any third-party software that uses UVC compatible frameworks such as Quicktime or DirectShow®.

Record 1080p video at 60fps (frames per second), to save your content so it can be shared, stored, or edited. Capture meetings, presentations, conference calls and from security equipment directly to your computer.

The UVCHDCAP is backed by a 2-year StarTech warranty and free lifetime technical support.

2.7
Average rating based on 3 reviews