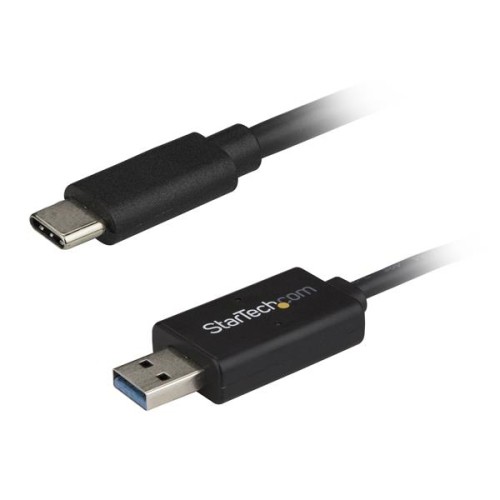 Transfer files from your old computer to your new USB-C enabled laptop or desktop computer, quickly over USB 3.0. This data transfer cable is easy to use and works with both Mac and Windows®.

Save time setting up your new computer

The transfer cable saves you time and effort when you’re upgrading from a USB-A computer to your new USB Type-C computer. You can quickly transfer your files and settings over USB 3.0, also known as USB 3.1 Gen 1, with file transfer speeds up to 5Gbps. There’s no CD or download required - the software is stored on the cable so you’re ready to go.

Compatible with Mac and PC

As you’re setting up your new computer, the USB 3.0 transfer cable offers wide compatibility letting you transfer files between two computers including Windows to Windows transfers, Windows to Mac, Mac to Windows, and even Mac to Mac transfers.

The cable is compatible with Windows Easy Transfer software for migrating to a newer version of Windows, up to Windows 8 (Windows 8.1 does not support data transfer cables.). The PCLinq software, stored on the cable, allows file transfers in any direction between any compatible OS, with no CD or download required.

The transfer cable comes in a convenient 2 m length for ease of use.

The USBC3LINK is backed by a StarTech 2-year warranty and free lifetime technical support.

4.5
Average rating based on 2 reviews