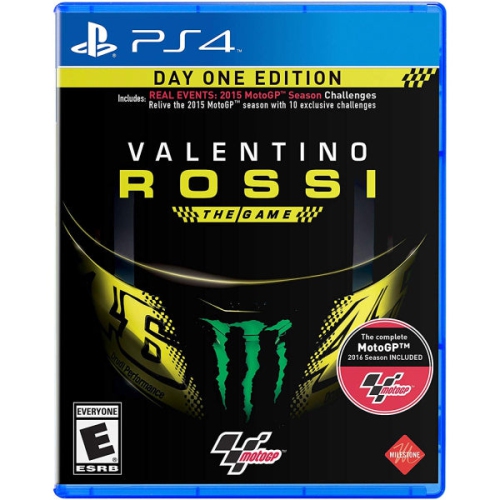 Valentino Rossi The Game: MotoGP 16 - Day One Edition from Milestone S.r.l for the Sony PS4 allows you not only to compete in the 2016 season but also with past Moto GP champions, giving you the chance to relive the most important stages of the career of the 9 times world champion.

Join Valentino Rossis VR|46 Riders Academy, start your debut season in Moto3 and be ready to compete in all motorsports categories Valentino will invite you to compete in.

The Flat Track races at the MotoRanch, the drift competitions at Misano and rally challenges at Monza will be the arenas in which you can hone your skills to become the new MotoGP champion!

·Rossi Story - Experience the career of Valentino from his perspective in 20 challenges from 1996 to 2015 Career.

·Start from the VR|46 Academy and work your way up to World Championship under the guidance of Valentino Game Modes.

·Prove yourself in the toughest of environments, facing off against up to 12 players Roster.

Genre
Sports & Racing
Shipping Charges
Free standard shipping may be available on orders over a minimum amount (before taxes, fees, and promo codes). Shipping charges may vary based on item size and your shipping address. Want a shipping charge estimate? Simply add an item to your cart, then access the cart and enter your postal code in the shipping estimate section.
Processing Time
Most items ship within 2 business days after an order is placed*. Allow additional time for shipping to your address.
*Please note: If an item you ordered becomes unavailable, you'll be notified and a full refund will be processed within 2 business days.
Shipping Area Restrictions
Shipping is not available in the following areas*:
*Please note: Shipping area restrictions may vary for large items. If an item can't be shipped to your address, we'll let you know during the checkout process.
Product Category
Video games
Return/Exchange Period
Physical: 30 days. Digital Downloads: Not returnable.
Condition
Unopened