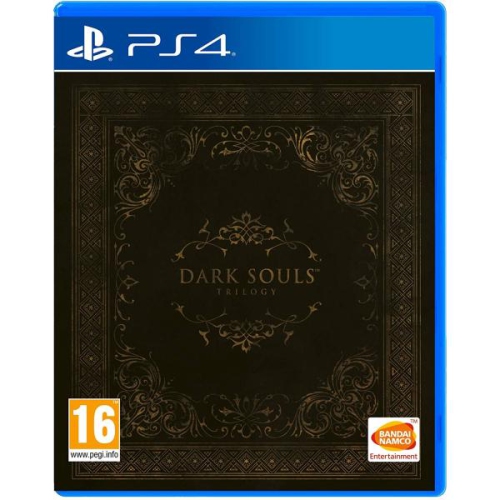 For the first time ever, own all three critically-acclaimed Dark Souls games and all associated DLC content in the Dark Souls Trilogy 3-disc collection from Bandai Namco for the Sony PS4.Enter the epic dark fantasy universe stricken by decline and the Curse. Explore the intricate world designs and deeply rooted lore. Each play through surprises with new challenges and discoveries.Dark Souls: RemasteredThen, there was fire. Re-experience the critically acclaimed, genre-defining game that started it all. Beautifully remastered, return to Lordron in stunning, high-definition detail. Hundreds of unique weapon, armor, and magic combinations allow you to create your own playstyle.Dark Souls II: Scholar of the First SinPrepare to Die again. An unforgettable journey awaits you in a breathtaking world where each dark corner and unexpected encounter will test your resolve. Go beyond what you thought was possible and discover incredible challenge and intense emotional reward.Whether you’ve previously played DARK SOULS II, or are new to the award-winning franchise, you are in for an entirely different experience with this exclusive, “Director’s Cut” version of the game.Dark Souls III: The Fire FadesNow only embers remain... Dark Souls III is the final journey in the series where players can fight through intense combat solo or team up for in co-op or PvP multiplayer.Players will be immersed into a world of epic atmosphere and darkness with colossal enemies, expansive environments, and challenging and intense gameplay combat. As fires fade and the world falls into ruin, prepare yourself once more to Embrace The Darkness!Play with hundreds of unique combinations of weaponry, armor, magic, and crafting options to create your own play style and gaming experience!Features:

·Dark Souls III: The Fire Fades - The complete Dark Souls III experience includes the award-winning base game and both DLC chapters: Ashes of Ariandel and The Ringed City.