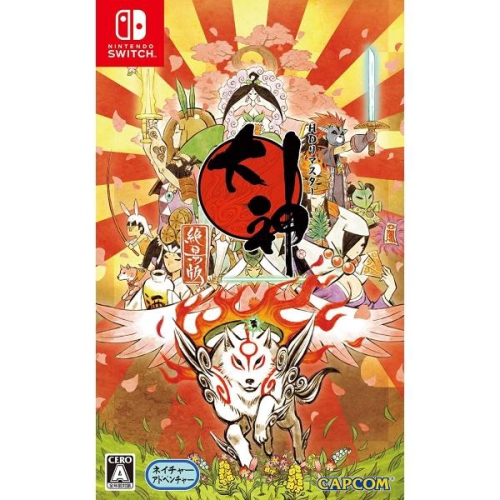 In Okami HD from Capcom for the Nintendo Switch, the player takes the role of the mythical sun goddess Amaterasu, in the form of a wolf. Her task is to restore color (or 'life') to the world by destroying the monsters who have stolen it.The much loved and highly acclaimed BAFTA award-winning visual masterpiece Okami HD originally released to critical and consumer acclaim, was hailed as one of the most beautiful games ever created, and this latest release with its renowned Sumi-e ink art style is now even more breath-taking as the graphics have been updated to take advantage of modern high resolutions.Once upon a time there was a small village called Kamiki Village, where everyone from the villagers to the animals, lived in peace and happiness. But then one day, the legendary monster Orochi, came back to life and put an evil curse on the entire area. Everything that had a bit of life, disappeared from the face of the earth, and in their place was left a dreadful, barren wasteland.Orochi's horrid curse spread all across the land, turning it into a veritable hell on earth, infested with countless monsters roaming the earth. But there was one hope. The majestic, wolf-embodied sun god Amaterasu.One-hundred years ago, Amaterasu used the godly power of the Celestial Brush, to face Orochi. But their battle consumed them both, causing them to disappear from the world, with Amaterasu losing the thirteen Celestial Brush powers in the process.Since Amaterasu is a deity, there are naturally people who worship her and people who don't. The more people who worship her (as a result of her restoring color and doing other good deeds for them), the more powerful she becomes!Features:

·Take on the role of Amaterasu, the Japanese sun goddess who inhabits the form of a legendary white wolf Shiranui on a quest to defeat Orochi who is responsible for turning the world into a wasteland.

·Players must use Amaterasu's magical abilities and arsenal of items, attacks and Celestial Brush techniques to restore the land of Nippon to its previous glory full of life and color.

·Along the way, Amaterasu will be called upon to help a cast of quirky and intriguing characters and defeat a bevy of brutal enemies to rid the land of Orochi's curse.

·Players will be able to choose between playing in a modern widescreen format or the original 2007 release's 4:3 ratio.

·Interactive loading game screens from the original game are also included, allowing players to earn bonus demon fangs which can be traded for in-game items.PLEASE NOTE: This IMPORT video game is REGION FREE and will play in all regions. However, Extra Content, DLC, and Online Services may not be compatible in your region without changing the location on your system. See our Region Compatibility List for full details!Click here to see the ENTIRE Nintendo Collection!