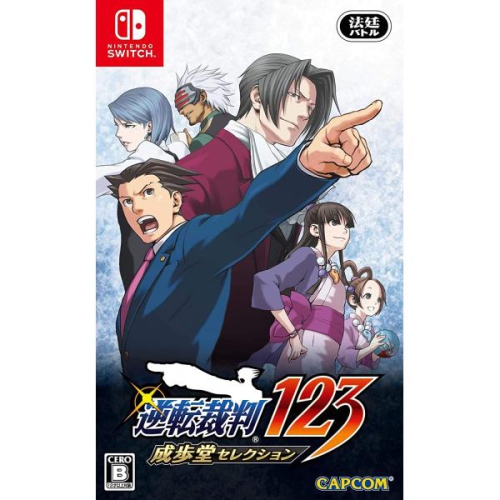 The Phoenix Wright: Ace Attorney Trilogy (known as Gyakuten Saiban 123: Naruhodo Selection in Japan) from Capcom for the Nintendo Switch includes Phoenix Wright: Ace Attorney, Phoenix Wright: Ace Attorney - Justice For All, and Phoenix Wright: Ace Attorney - Trials and Tribulations.This Region Free import plays in full English - or whatever language your system is currently set to!Defend the innocent and save the day! Courtroom hero Ryuichi Naruhodo lays down the law in the release of Gyakuten Saiban 123: Naruhodo Selection. Join rookie lawyer Ryuichi Naruhodo through the early years of his career in his quest to find the truth behind all of the classic cases!Prepare for intense courtroom showdowns by investigating crime scenes, collecting evidence, and questioning witnesses. Use evidence and the testimonies of witnesses to your advantage as you battle for the innocence of your client. Nothing less of a full acquittal will do in this court of law. Find the contradictions in witnesses' testimony to expose the truth!Phoenix Wright: Ace AttorneyNot everyone is innocent until proven guilty! Players star as a defense attorney, who must prove his seemingly guilty client's innocence no matter how dire the circumstances may seem.The game presents twisting storylines and intriguing gameplay in a comical anime style. Players must collect evidence, weed through inconsistent testimonies, and overcome corrupt agendas to ensure that justice prevails.Phoenix Wright: Ace Attorney - Justice For AllThe second game in the popular court room battle series from Japan introduces four new cases featuring new characters, plot twists and gameplay features. Players resume the role of Phoenix Wright, a defence attorney who must prove his client's innocence against the toughest of odds and most ruthless of adversaries.Players must exercise their legal prowess as they collect evidence, examine witnesses, analyse testimonies and seek the truth to ensure that justice prevails.Phoenix Wright: Ace Attorney - Trials and TribulationsPhoenix Wright is back as the third game in the popular Ace Attorney hand-held franchise comes to the WiiWare service. As Phoenix Wright, you'll play through five shocking new cases in first-person perspective.The game features two unique modes of play. In Investigations Mode you'll survey crime scenes, interview witnesses and gather evidence. You'll then present findings, listen to testimonials and examine witnesses in Court Mode.Trials AND Tribulations also includes the "Psyche-Lock" feature that allows Phoenix to use a line of questioning to reveal inconsistencies in witness testimony!Features:

·There's been a murder! Uncover the truth to save your Innocent client! Now with improved gameplay features!

See our Region Compatibility List for full details!PLEASE NOTE: This IMPORT video game is REGION FREE and will play in all regions. However, Extra Content, DLC, and Online Services may not be compatible in your region without changing the location on your system.